Maybe somebody beat you with a kickstand when you were a child, and you carry an irrational fear of them? Let it go, with the MP3 you can relax, you don’t need one. With a little practice, you can flip the right-thumb button inward just as you’re coming to a stop, which clamps the caliper to the ¼-of a brake-type disc which holds the MP upright. The people in the cars look at you with even greater suspicion. As soon as you twist the throttle to blast off, the lock releases and in town, most of the time, you’d never really know you had two wheels up front. (If you’re rolling backwards, though, the upright lock won’t release until you thumb the lever!) The lock-up mechanism even has its own ECU.

Its 493cc liquid-cooled four-valve Single is now fully ride-by-wire, and puts out a claimed 40.1 horsepower and 45.5 Nm (34 lb-ft) torque. Piaggio says that’s enough to push the MP3 up to 89 mph (don’t tell anybody I saw 98 indicated). Nobody will be able to complain about throttle abruptness, thanks to the CVT transmission.

Forty horsepower are plenty for a scooter; dropping the hammer when the light turns green leaves everybody in the dust and drowns out the annoying “beep” the MP makes when the thing that keeps it upright stops doing it. In spite of Peter Egan’s observation that the real purpose of a trike is to allow you not to miss any bumps in the road, the MP3’s 16.5-inch track means you can avoid a lot of them just like on a motorcycle. And it deals with the ones you can’t avoid pretty well thanks to nearly four inches of wheel travel up front, and 4.25 inches out back, controlled by a pair of preload-adjustable shocks.

A new three-channel ABS system developed with Continental manages each wheel independently to prevent lockup. Strangely, the MP needs a lot of lever pressure to get the tires chirping, with a wooden feel TR described last week in this three-wheeler comparison. Now there’s ASR, Piaggio-speak for traction control, disable-able with a dashboard button.

Front wheels are up from 12 to 13 inches, and now pack one 258mm brake disc each. There’s more room for both rider and passenger now,  more accessible underseat storage, and there’s a new glovebox atop the new dashboard with a USB port. The front’s been given a facelift and an LED running light, the rear end is completely redesigned.

Around town, surprisingly, you can still lane-split through gaps about as easily as the average sport-touring bike, which is a must-have for us California riders – the bike is narrower than the handlebars. Speaking of California, we were hoping for some el Nino to kick in so we could try the MP3 in the rain; it’s real reason for being is so that you’ll never lose the front end again in a low-traction situation.

What we found instead of water was a beach parking lot full of sand; you actually can get going 10 or 15 mph and throw the MP3 on its side in a way that would have you instantly down on a two-wheeled scooter; it countersteers just like a motorcycle. The MP just does a few side-shuffles  and carries on, no problem. When one front wheel’s losing traction, maybe the other one isn’t. And when both are losing grip, the simple triangulation of the thing keeps you up until you cease doing the stupid thing you’re doing. 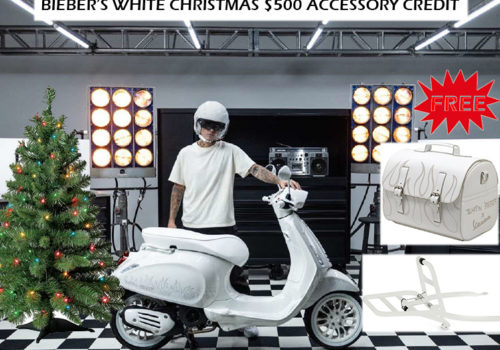 By AlexNovember 23, 2022Comments Off on BIEBER’S WHITE CHRISTMAS $500 ACCESSORY CREDIT 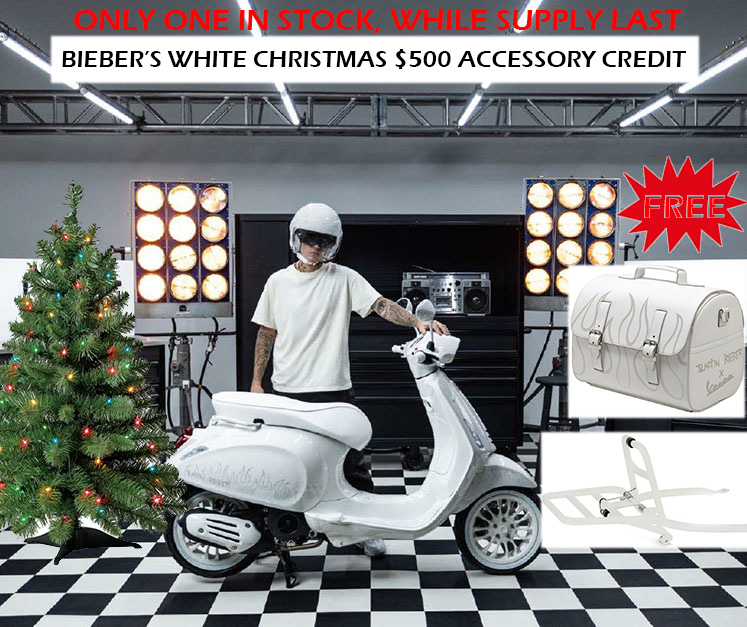 In preparation of the 2022 holiday season, Vespa is happy to offer a FREE accessories promotion for the 2022 Bieber Sprint 150!

We will be offering a $500 Accessory Credit towards the purchase of any new 2022 Justin Bieber 150cc WHILE SUPPLY LAST AND WE ONLY HAVE ONE IN STOCK. 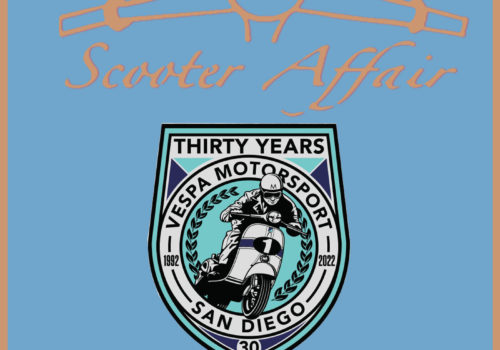 Learn all our deep dark secrets on the Scooter Affair Podcast

By AlexNovember 12, 2022Comments Off on Learn all our deep dark secrets on the Scooter Affair Podcast

Want to learn all our deep dark secrets?

Tune-in to Scooter Affair Podcast episode #24 for a deep dive into our shop history; past, present, and future. 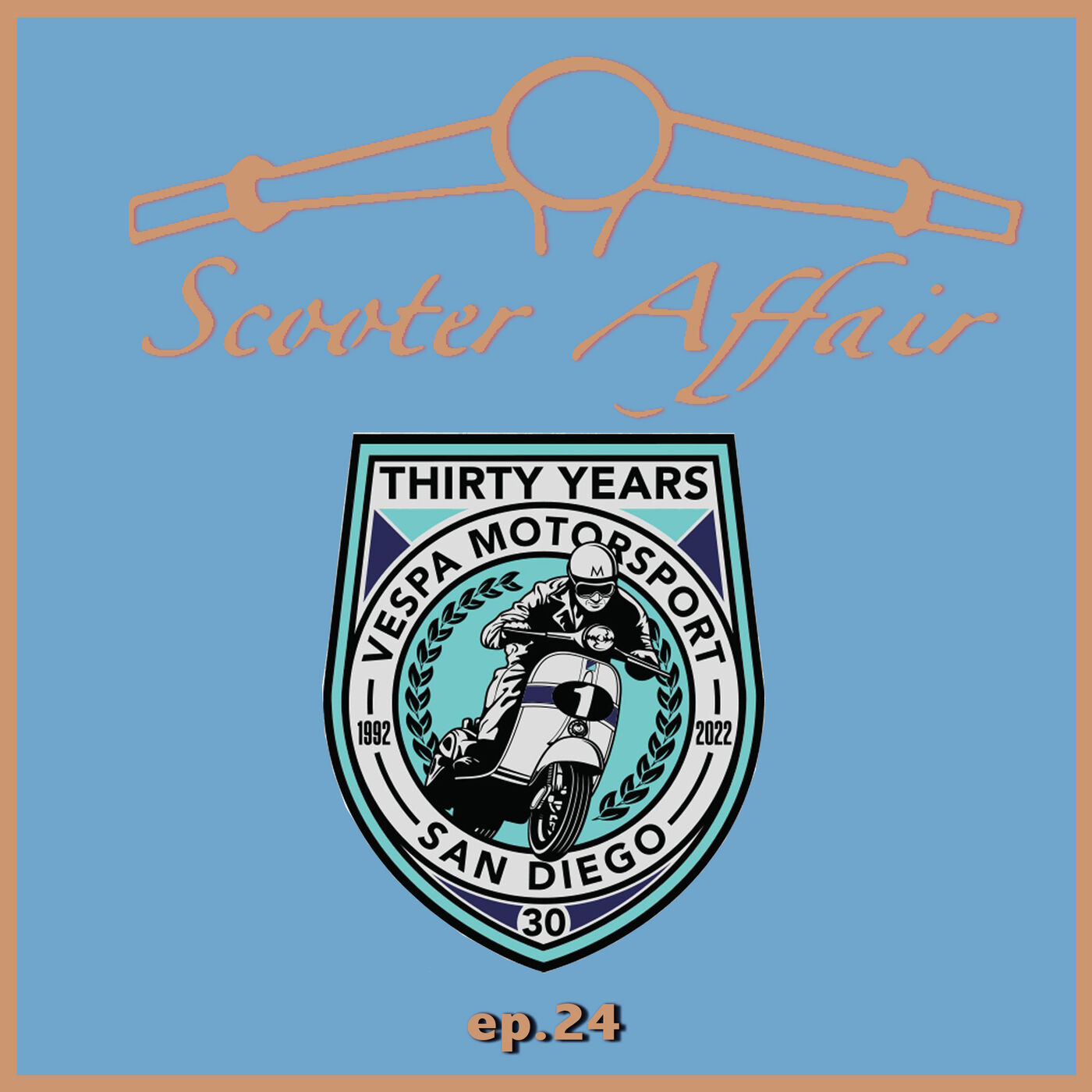 A BEAUTIFUL Honda PCX150 in amazing condition.  The Honda PCX150 is one of the most versatile, practical and sensible scooters on the planet, and a blast to ride!. The PCX150 has a new look for 2015, offers great fuel efficiency with plenty of room to carry a passenger. A bigger fuel tank this year adds even more range, while dual headlights and sharp new bodywork change up the look. Integrated storage for those trips to the market? Of course. Automatic transmission? Naturally.

The new 2015 PCX150 sports a new sense of style, highlighted by its new dual-headlight design. Inside, a larger fuel tank makes it even more practical. In between, its automatic transmission and great fuel efficiency make it a smart choice. Want to know more? Just click on the hotspots above for more detail.

The best-selling motorized two-wheeler in Europe is a Honda PCX. An interesting fact, given that Europeans know a thing or two about scooters. They have long recognized the user-friendly convenience, low cost of operation, low carbon footprint and the high fun factor that scooters bring to everyday transportation. Well it seems more and more Canadian city dwellers are figuring out that scooters may just be the perfect solution to high fuel prices, the high cost of parking and ever-increasing urban gridlock. A quick look at the changes to the 2015 PCX150 and it’s easy to understand why it continues to be held in such high regard both in Europe and in Canada. Starting with the exterior styling, the 2015 PCX150 offers a more modern look while retaining the slim proportions that allow it to slip so easily through traffic. The new bodywork features full LED lighting that not only improves conspicuity but reduces electrical load on the alternator, thereby improving efficiency. Additional low-friction technologies utilized in the engine work with new low-rolling resistance tires to improve fuel economy even further. With fuel tank capacity increased to 2.2 gallons for 2015.  Everyday convenience features now include a 12V power outlet, a hazard warning light system, a digital clock, a fuel consumption meter, a larger left hand fairing pocket that can accommodate a water bottle and a sprung seat hinge that keeps the seat open when accessing the 25 liter under seat storage area.

Get into Vespa Motorsport and check this great value before someone else buys it.

*Does not include California tax, title and registration fees. 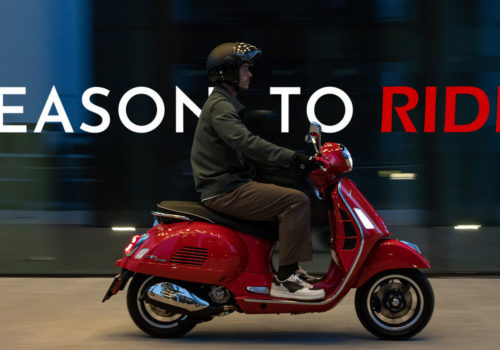 The SEASON TO RIDE

By AlexNovember 9, 2022Comments Off on The SEASON TO RIDE 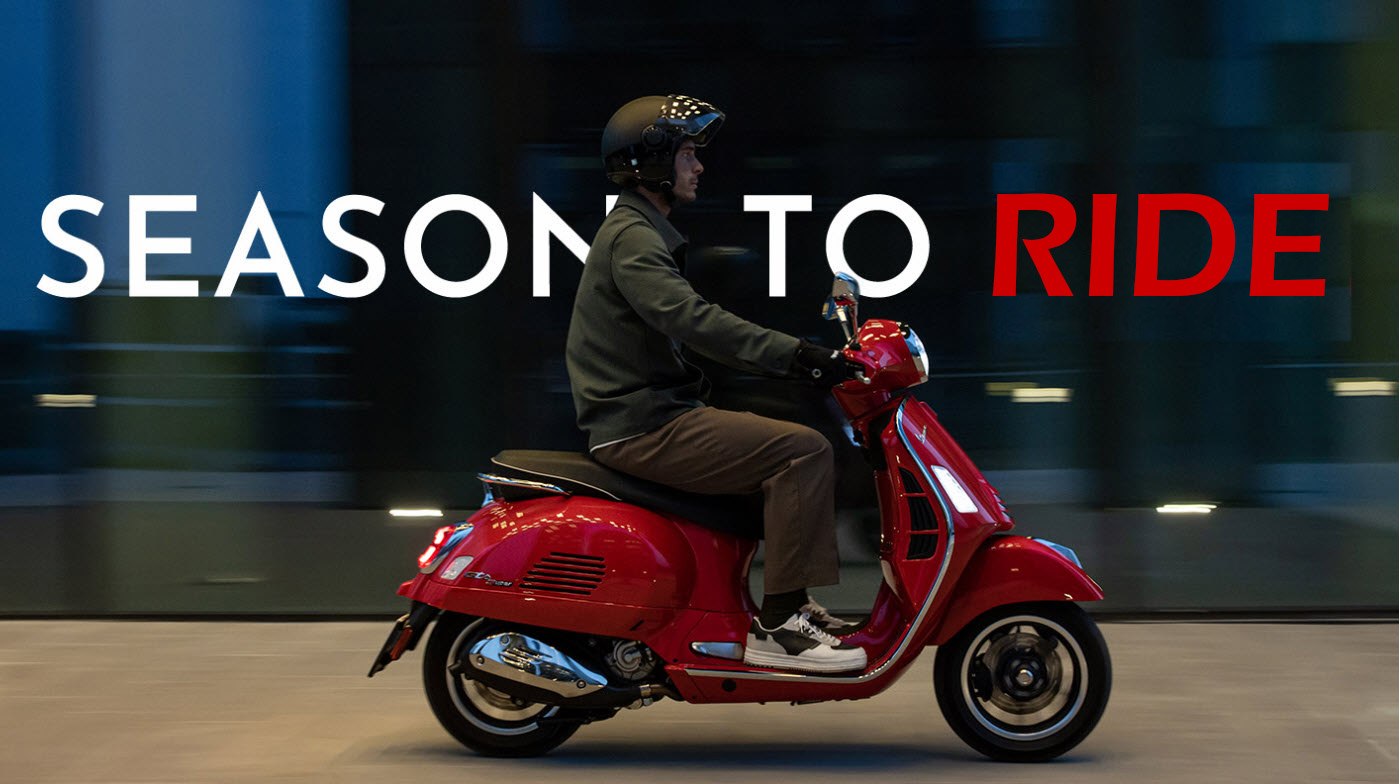 In San Diego, it’s always the Season to RIDE!

Save on gas, traffic, and time with a new Vespa or Piaggio scooter.

Note: The above financing programs are offered by Sheffield Financial, a division of Truist Bank, Member FDIC. Subject to credit approval. Approval, and any rates and terms provided, are based on credit worthiness. Other financing offers are available. Call us for more details. Rates advertised are based on a minimum bureau risk score of 700. Minimum Amount Financed $1,500; Maximum Amount Financed $75,000.  No Origination Fee. Other taxes, title and license fees will apply and can be wrapped into loan at 125 of the value. Financing promotions void where prohibited.  Offer effective on eligible and qualified on NEW units purchases. See us for product eligibility and qualifications between 11/01/22 and 11/30/22. Other qualifications and restrictions may apply. Offer subject to change without notice. [“E” means estimate.]